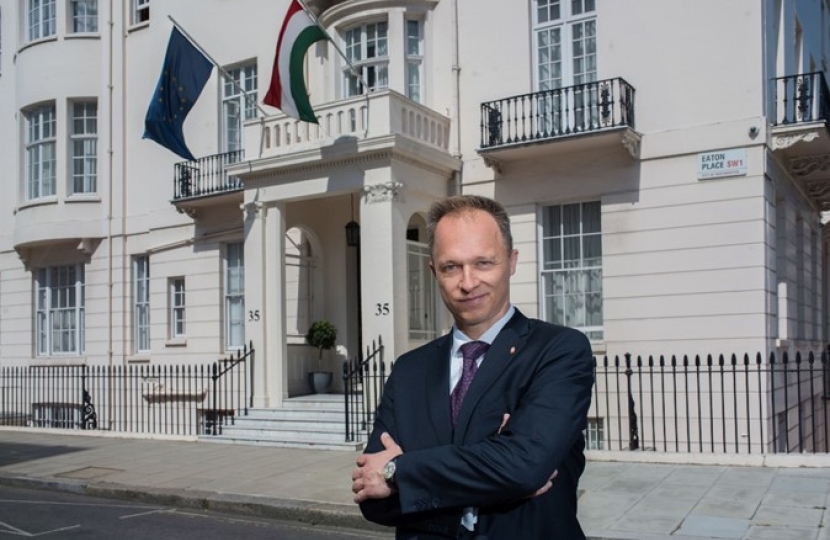 On Friday the 15th of October 2021 the Conservative Foreign and Commonwealth Council was honoured to be invited to the Hungarian Embassy by His Excellency Dr. Ferenc Kumin, the Hungarian Ambassador to the Court of St. James, for a celebration of one-hundred years of Anglo Hungarian diplomatic relations.

Following an introduction by CFCC Chairman, Rt. Hon Lord Taylor of Holbeach CBE, that introduced the core concept of “looking backwards to look forwards,” guests were treated to a thought-provoking and passionate speech by his excellency Dr. Kumin on how the rich diplomatic history between Hungary and the UK has been fostered by inherent similarities in the two nations’ cultures. His argument was that these shared values become ever more important for the maintenance of strong, productive relations between citizens and countries in an increasingly globalised world, and should therefore be embraced, rather than chastised.

Initially, Dr. Kumin provided an engaging historical account of the colourful relationship enjoyed by Hungary and the United Kingdom over the last century. From Ferenc Puskás’ famous two goals at Wembley in the 1953 ‘Match of the Century,’ through Margaret Thatcher’s first official visit to the former Eastern bloc being one to Hungary, and the Prince of Wales’ candid admission in 2010 at the Sandor Palace that he was, in-fact, “one thirty-second Hungarian,” Dr. Kumin’s summary highlighted a bond between Hungary and the United Kingdom that goes far beyond the purely diplomatic.

However, despite this rich history between our two nations, as well as the wider contribution of Hungarian art, science and music to European culture, the Hungarian government currently finds itself blighted by controversy. Dr. Kumin sensitively addressed this matter, highlighting four often misrepresented values of his government:

Firstly, an emphasis on liberal conservatism in order to oppose the forces of illiberalism on both sides of the political divide. Within this, Dr. Kumin renewed his government’s commitment to low taxation and the free market as the best guarantors of wider societal prosperity.

Secondly, a revival of social conservatism and the family values associated with this. Indeed, a renewed engagement with the family as the core unit of political organisation by the Hungarian government provides an interesting path through which to address the dual issues of falling birth rates and ageing populations that currently affect most western nations.

Thirdly, a return to fiscal conservatism. Despite the pandemic, the Hungarian economy is predicted to grow by 5% per annum. It may well be that, in a post-COVID world, more nations are required to adopt the Hungarian financial model in order to secure their respective financial situations.

Finally, the redefinition of nationalism as a positive force. In contrast to the frequently published stories in continental media channels that depict Hungary as anti-European Union, Dr. Kumin painted an alternative picture of Hungarian attitudes towards the Union. Instead of seeking to undermine the European Union, Dr. Kumin and his government are instead arguing in favour of as strong an EU as possible by strengthening individual member states, rather than these member states giving up their sovereignty to Brussels. This was a refreshingly new take on how to begin to fix the undoubted problems with the European Union as it exists today, and could provide a constructive blueprint for future EU reform.

His Excellency’s speech was followed by a myriad of intriguing questions by our esteemed guests on subjects ranging from the position of the Hungarian community in the UK to which areas of trade could be emphasised in future between Britain and Hungary.

Questions were followed by a truly delicious luncheon featuring many dishes of traditional Hungarian origin and all accompanied by superb Hungarian wines. We would like to thank the Hungarian Embassy once more for its generous hospitality, and all our members which attended only our second in-person event since lockdown easing – we look forward to seeing you at one of the many functions which are coming up in the next weeks.

Ministry of Foreign Affairs and Trade:
Ambassador of Hungary to the Court of St James's

Ministry of Foreign Affairs and Trade:
Deputy State Secretary for the Development of European and American Relations

Ministry of Foreign Affairs and Trade:

Office of the President of Hungary: