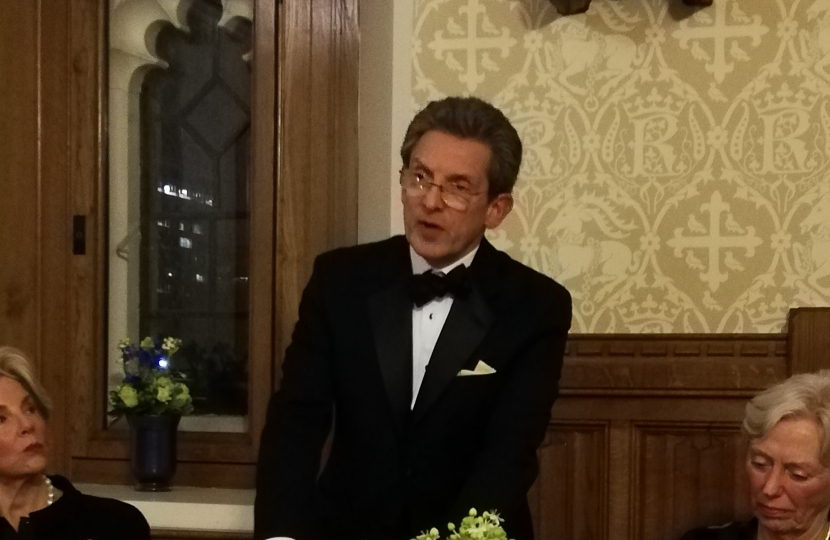 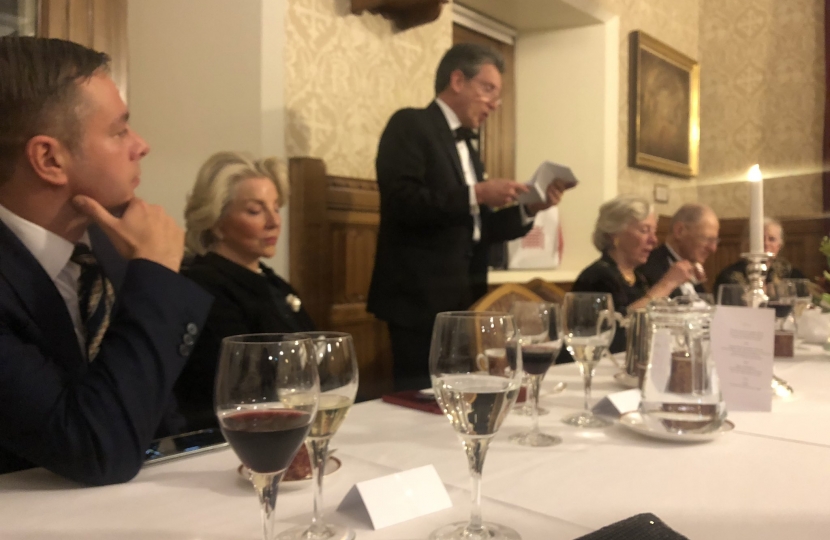 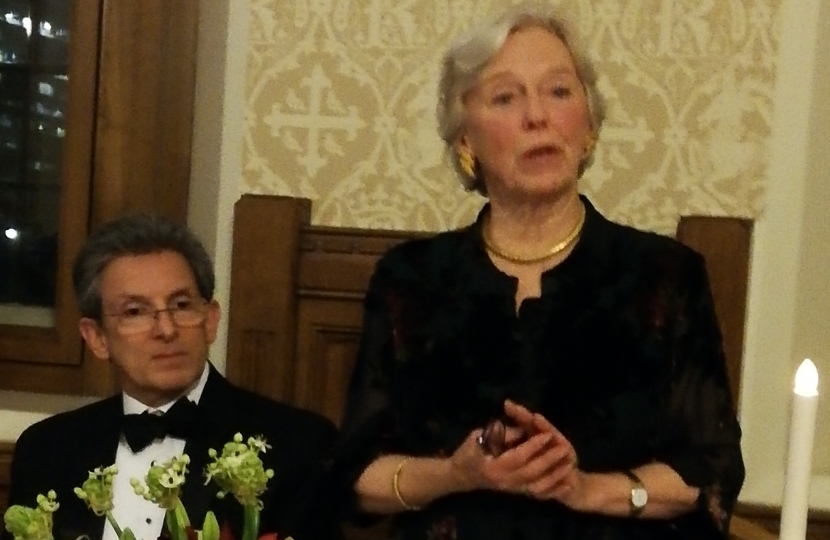 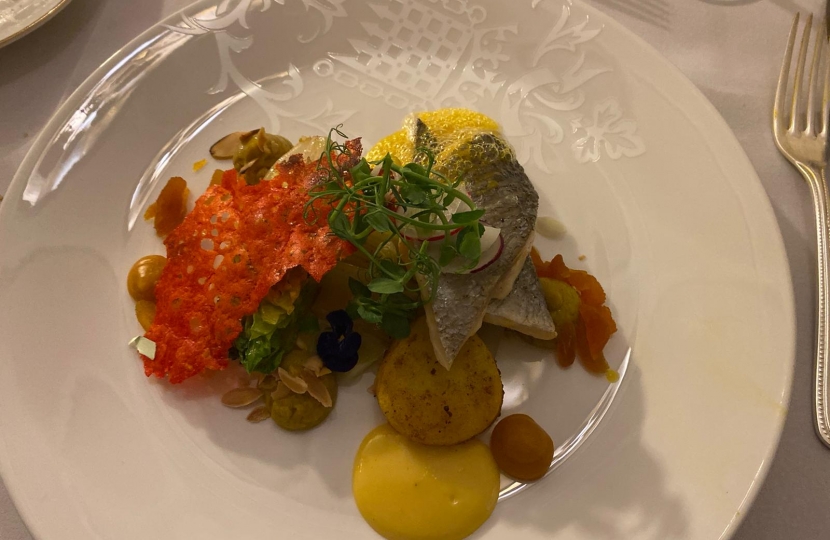 The Ambassador of Peru, HE Juan Carlos Gamarra, was hosted by Baroness Hooper and after dinner spoke about the strength of bilateral relations between Peru and the UK.

His Excellency, Mr Juan Carlos Gamarra, was appointed as Ambassador of Peru to the Court of St James and as Permanent Representative of Peru to the International Maritime Organization on October 1, 2018.

He holds a Master of International Public Policy from Johns Hopkins University and has a wide knowledge and expertise in international negotiations.

Ambassador Gamarra is an experienced career diplomat who has held several posts abroad, serving as Ambassador to Switzerland from 2009-2013 and to the Holy See from 2013-2015. Prior to his current appointment, Ambassador Gamarra was the Director General of Protocol and State Ceremonial in Peru.

This is the text of the speech:

It is a great pleasure to be here tonight, and to be able to address the Conservative Foreign and Commonwealth Council in this historic venue.

Perhaps I should start by saying that we can be very pleased by the current state of bilateral relations between Peru and the United Kingdom, and fortunately there is ample evidence to show that they are passing through one of the finest moments. To name a few:

This positive bilateral environment was furthered in 2016 with the visit to Peru of then Secretary of State for Foreign Affairs and current Primer Minister, Boris Johnson, as well as the Princess Royal`s trip to Peru for charitable activities. This deepening of our ties has led to the institutionalisation of a political-diplomatic dialogue between the Foreign and Commonwealth Office and the Peruvian Ministry for Foreign Affairs, which held its first meeting in November 2018 in Lima and, most recently, its second meeting in October in London.

The Government to government Agreement previously mentioned provided a framework for British involvement in the 2019 Panamerican Games through consultancies for the management and supervision of the project, support for infrastructure and start of operations, and the legacy of the games, which allowed the UK to become the lead delivery partner for that important event. This was necessary due to the fact that work on the organization of the Games had serious delays and risked not being ready on time. Fortunately, this partnership worked out successfully and led to the establishment of a Task Force on Infrastructure, involving high-level officials and British companies interested in working in Peru. The Task Force will hold its third meeting later this month in Lima and its main driver is to build on the positive experience of the Panamerican Games and the Project Management Office that achieved finishing its mission on target so that British companies can participate in the construction of 52 projects that have been prioritised in our National Infrastructure Plan.

Recalling this particularly positive context, I want to dwell for a moment on the likeminded interests of our two countries in the fight against corruption, which is one of the main foundations for democratic governance and a leading principle in the conduct of business and public affairs, shared by Peru and the United Kingdom.

As some here might know, the current President of Peru, Martin Vizcarra, took office in March 2018 and did so with the promise of tackling the endemic corruption that had come to light in public investment projects during at least four Peruvian administrations. One of the first opportunities to do so was during a Summit of the Americas, held in April last year in Lima, where the member countries of the Organisation of American States unanimously agreed to the Lima Commitment on “democratic governance against corruption”.

The Lima Commitment underscores that the fight against corruption is fundamental “to strengthening democracy and the rule of law in our States”, and that “corruption weakens democratic governance and citizens’ trust in institutions” and has “a negative impact on the effective enjoyment of human rights”. In this sense, there is broad consensus in the Americas on both the negative effects of corruption and the need to tackle it. There is thus a deep link between the fight against corruption and the health of democratic governance and democratic institutions.

At the national level, this regional commitment has been expressed in the rich Peruvian experience of taking those responsible for corruption to the courts, with wide-ranging prosecutions and convictions. Peru is regularly cited as an example of a consistent and strong effort on investigating allegations of corruption that have gone all the way up to former Presidents and leaders of some of the most important political parties, as well as high profile businessmen and judges of all levels. Although it is no doubt sad to know that there was a major corruption scheme in procurement processes in Peru, several cases of wrong-doing by Peruvian authorities have been exposed and our prosecutors and judges remain focused on pursuing investigations to the end, regardless of the political affiliations of those investigated, a task that has been unequivocally supported by the current administration.

This context has led to the growing need for our Government to establish a strong legal and contractual framework to avoid a repetition of these regrettable experiences, making good on its will to attend the pressing needs of its population while fostering transparency and accountability in the management of public affairs. Peru has a major infrastructure gap between the projects and assets already in operation and those needed in several key areas, such as education, health, water and sanitation, energy, transportation, security, among several others. Most importantly for the British government and firms, these efforts by our government will be better served if we can count on the reputation, expertise, and know-how of business’ in the United Kingdom.

Here in the United Kingdom, the powerful Bribery Act of 2010 ensures that British firms avoid illegal practices that unfortunately have been employed by businessmen of several other countries, thus making them ideal partners for Peru. This was the basis for the already mentioned government-to-government agreement for the Pan American and Parapanamerican Games, where many different key features of the British knowhow on sports infrastructure were particularly valuable, such as the positive experience of organising the London Olympic Games on time and on budget, the expertise on both the procurement process and the actual building of infrastructure, and the impressive development of the London Legacy.

In this way, there is a positive alignment of British interests to ensure that its firms act in accordance to the rule of law in their dealings in other countries, in a transparent and accountable way, with the objective of the Peruvian government to engage with reputable and experienced partners to satisfy the needs of its population while avoiding the reoccurrence of these regrettable cases of corruption.

This meeting of interests has led to the valuable cooperation and support of the United Kingdom to strengthen Peru`s efforts in tackling corruption, with several landmark achievements such as the enactment of a “National Policy of Integrity and Fight against Corruption” for the period 2018-2021; the establishment of the Secretary of Public Integrity, under the umbrella of the Prime Minister`s office, in 2018; and the entry into force of new legislation that protects whistle-blowers on acts of corruption, in 2017.

Alongside this coincidence on the Peruvian and British approaches towards the fight against corruption and its importance as the basis for democratic governance, I would like to highlight some features of the Peruvian economy that explain why the UK might be interested in doing business there.

The Peruvian economy has had an impressive streak of almost 25 years of growth, with low inflation, stable exchange rate, sound macroeconomics, a prudent fiscal policy, and full access to the international financial markets. As the President of the Peruvian Central Bank said in a speech here in London last February, we are particularly proud of our investment grade, which has given much-valued stability to the Peruvian economy, turning it into a well-regarded emerging market, low-risk, business-friendly, and open to free trade and the flow of foreign investment.

Moreover, Peru is part of two relevant economic integration schemes that are of special interest to the United Kingdom and that might offer broader opportunities for further enhancing the reach of British firms abroad.

The first one is the Pacific Alliance, a booming regional economic integration scheme, where Peru is a partner of Chile, Colombia, and Mexico, all of them business-friendly Latin-American economies committed to free trade. The United Kingdom is already an observer State of the Pacific Alliance and there have been renewed efforts for strengthening the bond between member States and observer States, through the establishment of new forms of mutually beneficial cooperation.

The second one is the Comprehensive and Progressive Agreement for Trans-Pacific Partnership (CPTPP), encompassing eleven countries whose combined economies represent the third-largest free-trade area in the world by gross domestic product, after the North American Free Trade Agreement and the European Single Market. The States-party of the CPTPP include Australia, Canada, Japan, New Zealand, and Singapore, among others. Peru has already signed its constituent treaty and is currently in the process of its ratification, while the British government has explored the possibility of becoming a part of the CPTPP once Brexit is achieved. We have already expressed our support for any future interest in the incorporation of the United Kingdom to this economic integration regime if it decides to take this step, as we feel that we share the same values of free trade and globalisation.

As Brexit goes ahead, there has been renewed interest from the United Kingdom in foreign markets, with both public and private sectors seeking new opportunities for trade and investment. And Peru wants to position itself as a privileged partner in this process. We have already witnessed this last year when the mining company Anglo American invested 5,000 billion pounds in the Quellaveco copper mine.

In this sense, we are very satisfied with the signing of a continuity agreement, that will enable our bilateral trade and investments to keep on growing. We will shortly start negotiations for a bilateral agreement to avoid double taxation which will no doubt improve the working environment for potential investors. There are numerous opportunities for British firms to do business in Peru and we hope that these conditions may allow us to be more competitive, in order to further even more our economic ties.

At the onset of the Republic of Peru as an independent country, in 1821, our main investment and trade partner was the United Kingdom. On the verge of the bicentennial of our Independence, I am very happy to see that this country is once again becoming our biggest source for foreign direct investment. Our two countries have major political coincidences on the international agenda, on important issues such as climate change, security, international criminality, media freedom, democratic governance, and the fight against corruption, among others. These are all signs of the great potential that awaits us, and I look forward to continuing to deepen even more this reciprocally fruitful relation, that has a core in the economic sphere but that should be progressively broadened to the social, political, cultural, and scientific affairs, as Peru has much more to offer, and this is just the start.

Thank you very much