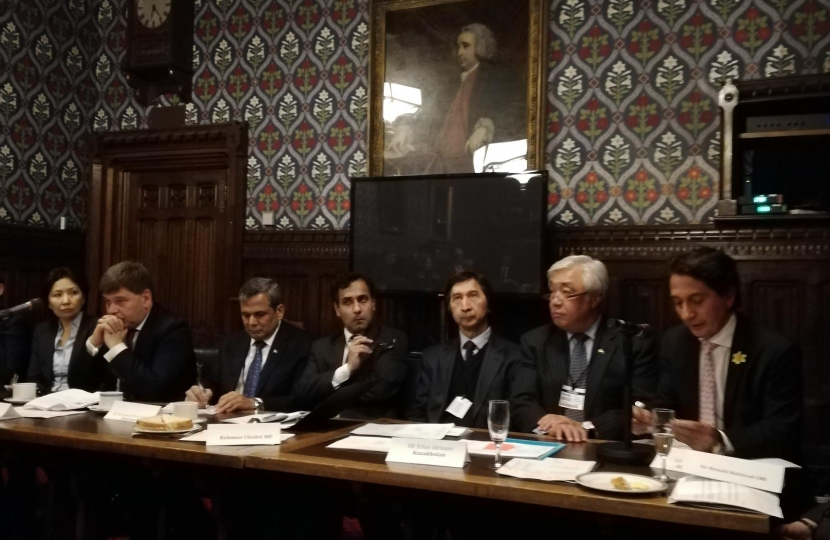 Event hosted by Andrew Bridgen MP, Chairman of the APPG for Uzbekistan

with Bota Hopkinson, Chair of Conservative Friends of Eurasia

The Heads of Mission for Afghanistan, Kazakhstan, Kyrgyzstan, Pakistan, Tajikistan, and Uzbekistan spoke at a Panel event.

The CFCC was delighted to be joined by the Conservative Friends of Eurasia for an evening of addresses from the Heads of Missions of six “Stan” nations; Afghanistan (HE Said Jawad), Kazakhstan (HE Erlan Idrissov), Kyrgyzstan ( HE Gulnara Iskakova), Pakistan (HE Mohammad Nafees Zakaria), Tajikistan (HE Masud Khalifazoda), and Uzbekistan (HE Alisher Shaykhov)

HE Said Jawad, representing Afghanistan, began the series of presentations. He spoke thankfully of the aid provided by British forces historically, noting how further aid would be welcomed considering the two main challenges Afghanistan faces: ensuring fair, democratic elections, and securing a peace treaty with the Taliban, a process which is needing to be hastened given the US plans of withdrawal from the region. Mr Jawad also mentioned the importance of modernising the nations infrastructure given its important location as a crossroad of trade routes from states such as India, an idea echoed from HE Erlan Idrissov of Kazakhstan in the next speech. Mr Idrissov discussed the modernisation process of Kazakhstan since the collapse of the Soviet Union, which has led to a substantial growth in GDP and 70% of trade routes between North and South Asia going through the nation. He also noted the strong relationship between Kazakhstan and the UK, with the UK being one of the top 5 largest investors in Kazakhstan and a key trade partner.

The idea of modernisation and infrastructure reforms seemed to be the key overarching priority of all six nations, with the next Head of Mission, HE Gulnara Iskakova of Kyrgyzstan, emphasising Kyrgyzstan’s focus on improving health services, protecting employment, and creating sustainable development. Whilst Kyrgyzstan is generally prioritising strengthening local relations in the region, Mrs Iskakova mentioned how, in an increasingly globalised world, nations like Kyrgyzstan can begin to strengthen their relations with the UK, and have a lot to learn from our parliamentary democracy. This notion was one forwarded by Pakistan’s Head of Mission, HE Mohammad Nafees Zakaria, who talked of the importance of connectivity and economic development in a world of interdependence.

The final two addresses came from Tajikistan’s HE Masud Khalifazoda and Uzbekistan’s HE Alisher Shaykhov. Both speeches focused primarily on their respective nations aims to increase their global presence by welcoming foreign investment and tourism, with Mr Khalifazoda talking about the success of Tajikistan’s open doors foreign policy and the success of their agricultural and industrial developments, and Mr Shaykhov emphasising Uzbekistan’s tolerance and friendliness towards outsiders. The evening then finished with a vote of thanks from Bota Hopkinson, Chair of the Conservative Friends of Eurasia.

Ambassador Jawad also served as Diplomat-in-Residence at Johns Hopkins University’s Paul H. Nitze School of Advanced International Studies (2010-2015), and the Senior Fellow at Harvard University’s Future of Diplomacy Project at the John F. Kennedy School of Government (2010-2011). He is a graduate of Kabul French Lycée Esteqlal (1975) and the Faculty of Law and Political Science of Kabul University (1980). He studied Law in the Westfaelische Wilhelms University in Muenster, Germany (1981-1985), and obtained an MBA from the Golden Gate University in San Francisco (2001). He holds an honorary doctorate degree in International Management from Argosy University in Washington, D.C (2004).

As Ambassador, he re-established the Embassy of Afghanistan in Washington, DC and developed it into one of the most responsive and successful missions in Washington. He managed Afghanistan’s diplomacy at a critical time with its key strategic partner through extensive interaction with the White House, State Department, Pentagon, U.S. Congress, U.S. media and academia; and initiated Afghanistan’s diplomatic relations with Brazil, Argentina, Colombia and Mexico. As Corporat CEO of Capitalize, he led a dynamic team of international business experts advising foreign governments, international companies, and investors on politics, defense, security, market entry, commercial opportunities, and development strategies in Central Asia and the Gulf regions, including Afghanistan.  As Chief of Staff of the President of Afghanistan and Press Secretary , he was a member of the cabinet and the National Security Council contributing to rebuilding the country’s national defense, security and civil institutions, notably the Ministery of Defense, formulating strategies and implementing structural reforms and organizing national councils and Jirgas. He acted as the President’s Principal Liaison with the Constitutional Commission in 2002. Ambassador Jawad’s op-eds and interviews have appeared in The New York Times, the Wall Street Journal, Time, the International Herald Tribune, Der Spiegel, Le Monde, The Guardian, Foreign Affairs, NBC’s “Meet the Press,” CNN’s “The Situation Room” and BBC. He has lectured at many academic intuitions in the United States, Asia, and Europe, and has been a frequent speaker at think tanks and policy centers worldwide.

He has received numerous national and international decorations and and awards, including the Medal of Sustained Service by the Constitutional Loya Jirga, Kabul, 2003; Special Award for Improving the Quality of Life, Washington, DC, 2007; and Award of Merit for Rebuilding a Nation, American Society of Civil Engineers, Washington, D.C., 2004.  He speaks French and German and plays polo.

Born on 28th April 1959 in Karaganda Region of Kazakhstan.

In 1981 and in 1992 he graduated from the Moscow State Institute of International Relations and the Diplomatic Academy of the Ministry of Foreign Affairs of the USSR respectively.

In August 2017, he was appointed non-resident Ambassador to Ireland and Iceland.

H.E. Mrs. Gulnara Iskakova was a Law Professor at the American University of Central Asia and Expert of the Center for Political and Legal Studies (public association), Kyrgyzstan. She started and headed the American University of Central Asia (AUCA) Law Department for six years, introducing a new type of legal education in Kyrgyzstan. Later she was Manager of the Local Self-Governance Program at the UNDP, then Deputy Chief of the Parliamentary Capacity Building Project at the USAID in Bishkek. H.E. Mrs. Gulnara Iskakova holds PhD in Law from the Kazakh National University and received an LLM from the Law School, Duke University, USA (Muskey fellowship), Law degree from the Kyrgyz State University. Dr. Iskakova was a Fulbright Fellow at Indiana University, USA, as well as the DAAD (German Academic Exchange Program) fellow at the Max Planck Institute in Heidelberg, Germany.

She is the author of publications devoted to presidential and parliamentary separation of powers, rule of law development, electoral and judicial system reforms in Kyrgyzstan. She also co-authored the first version of the draft Constitution on the parliamentary form of governance in 2006 and the current 2010 Constitution, the first Election Code of 1998 and helped in revision of it and some other laws in the country. She has been also active in the public life aiming at achieving common good, freedom and democratic development in Kyrgyzstan.

H.E Mohammad Nafees Zakaria joined Foreign Service of Pakistan in November 1988. He assumed the charge of the office of the High Commissioner for Pakistan to the United Kingdom on 21 January, 2019.

His other diplomatic assignments in Pakistan Missions abroad include Abu Dhabi, Jakarta, and Bangkok.

Specialist, Ministry of Foreign Affairs of the Republic of Tajikistan

Third Secretary, HR Department, Ministry of Foreign Affairs of the Republic of Tajikistan

Second Secretary, HR Department, Ministry of Foreign Affairs of the

Deputy Head of HR Department, Ministry of Foreign Affairs of the

First Secretary, Embassy of the Republic of Tajikistan to the People`s  Republic of China

First Secretary, Embassy of the Republic of Tajikistan to the United States of America

Counselor, Department of International Organization, Ministry of Foreign of the Republic of Tajikistan

Deputy Head of HR Department, Ministry of Foreign Affairs of the

Head of HR Department, Ministry of Foreign Affairs of the Republic of Tajikistan

Deputy Head of Main Consular Department, Ministry of Foreign Affairs of the Republic of Tajikistan

1979-1992 Researcher, Deputy Director of the Institute of Oriental Studies, Academy of Science

1987-1988 Internship at the University of Cairo, Arab Republic of Egypt

1992-1993    Chief of the Department for management of prospects and analysis of Foreign Trade Activities, Ministry of Foreign Economic Relations of the Republic of Uzbekistan

Activities, Cabinet of Ministers of the Republic of Uzbekistan

Activities, Cabinet of Ministers of the Republic of Uzbekistan

1998-2001 Ambassador of the Republic of Uzbekistan to Japan

2005-2006    Minister of Foreign Economic Relations, Investment, and Trade of the Republic of Uzbekistan