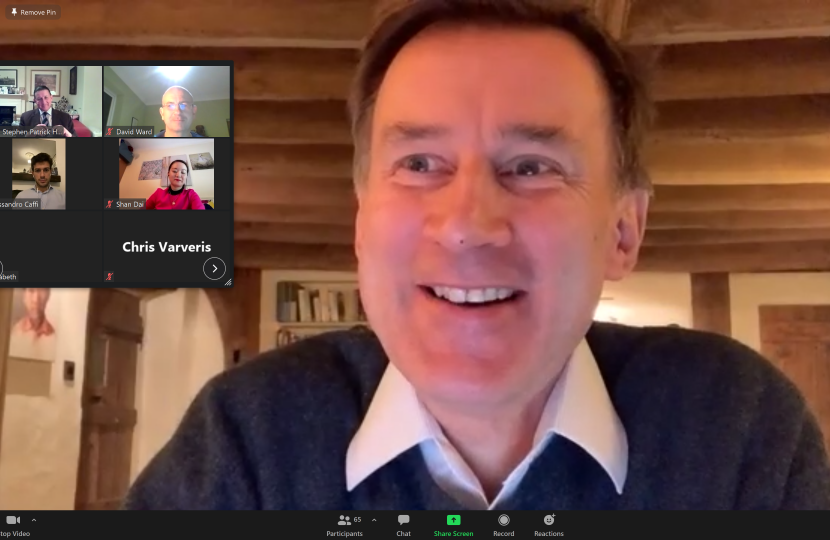 The CFCC was delighted to be joined online by the Rt Hon Jeremy Hunt, the Member of Parliament for South West Surrey, whose illustrious career has seen him serve both as the longest running Health Secretary in British history and as a formidable Foreign Secretary. Following an introduction by the Rehman Chishti MP, Hunt began his talk by addressing the biggest foreign policy issue facing modern statesmen: the rise of China, and the subsequent authoritarian challenge it poses to the Western-led “world order” established in the 20th century. Whilst Hunt argued that much can be learnt from the way in which the West overcame the USSR in 1980s, he also highlighted how different the current situation is, insofar as China does not face the problem of a crumbling economy that the USSR did. Rather, its economy is predicted to become the largest in the world by 2028. Britain and its liberal allies must therefore adopt a vastly different strategy to the 1980s if a new Cold War is to be avoided and democratic governance is to prevail as the global standard.

This new strategy, according to Hunt, must firstly involve a concentration on technology; the UK should not let itself fall behind Chinese innovation if it is to maintain its dominance in a world increasingly reliant on technological exploits. Secondly, it must involve strengthening democracies and their institutions. If democracies are to justify themselves as the best form of governance, they must show the world that they truly are. The storming of the Capitol in the US and the lacklustre response to the Covid-19 pandemic across democratic governments has cast doubt on whether such regimes do really outshine those of an authoritarian nature, and thus Hunt concluded his talk by arguing that democracies need to rejuvenate themselves and prove that they can be world leaders, something which Britain’s widespread connections should play a key role in enabling.

Following his speech, Hunt answered a number of questions given by CFCC members. The topics of these questions ranged from the dangers of social media to the importance of “vaccine diplomacy” in the coming years, and were all answered with the excellent insight that Hunt’s years of experience brings to the table. The question that perhaps stood out the most, however, was when Hunt was asked how he would describe the UK if he had only one word to do so. His answer: "democracy." The UK has, throughout its history, been a bastion of democratic values, and it is in this vein that we must continue if we are to lead the world in the post-Brexit era.

The Rt Hon Lord Hague of Richmond, William Hague, served for 26 years in the British House of Commons until he stood down in 2015.