"Chile at a Crossroads" with Ambassador of Chile, HE David Gallagher 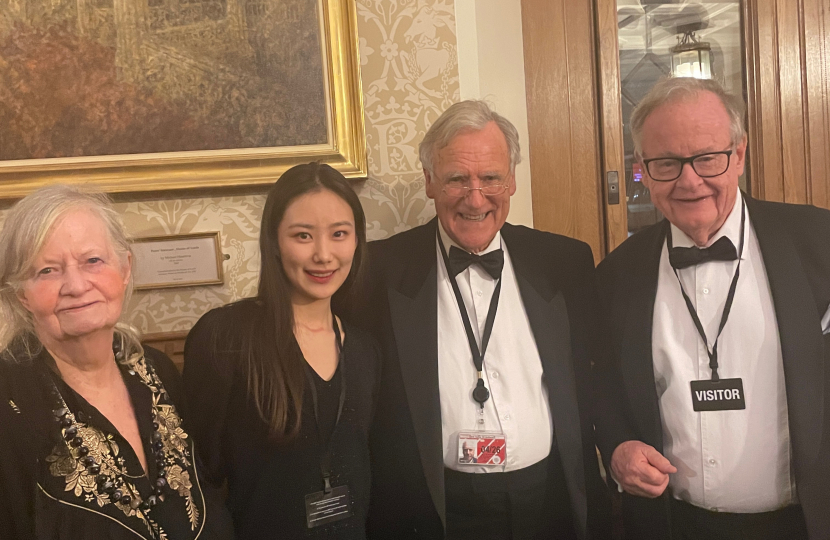 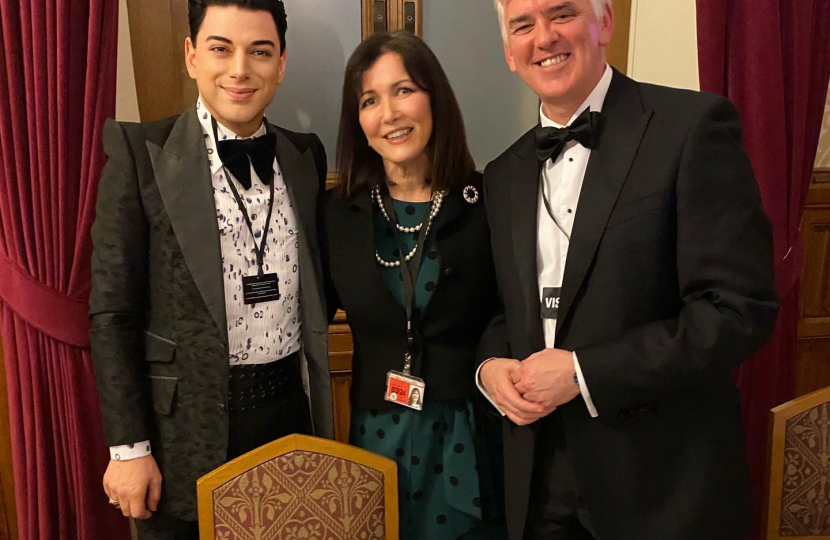 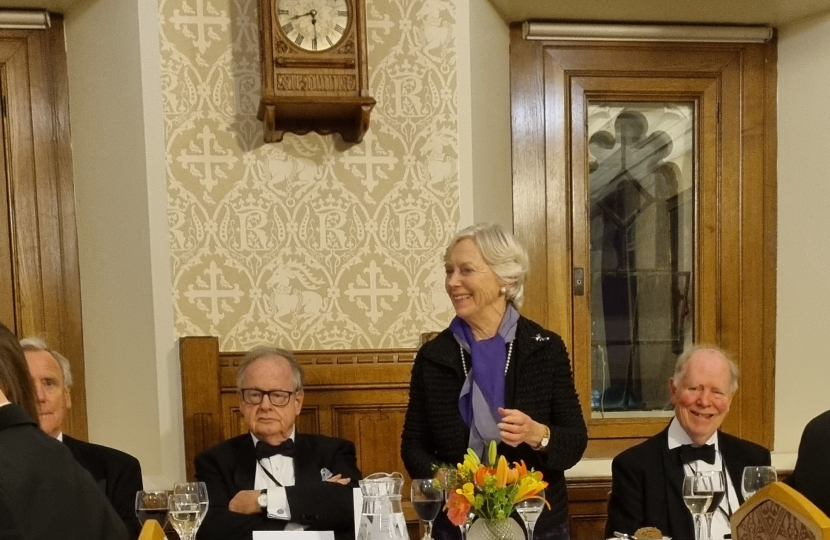 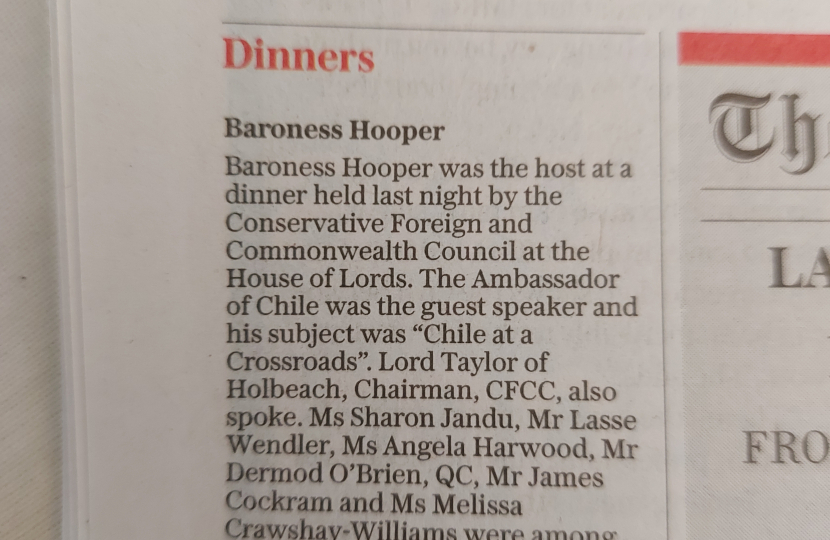 Speech by HE David Gallagher

“Chile at a Crossroads” with His Excellency Mr David Gallagher, Ambassador Extraordinary & Plenipotentiary of Chile to the Court of St. James’s and Permanent Representative of Chile to the IMO, hosted by The Baroness Hooper CMG

On Thursday 24th of February 2022 the Conservative Foreign and Commonwealth Council had the privilege of gathering in the Attlee Room of the House of Lords for a memorable event with H. E. Mr David Gallagher, Ambassador of Chile to the Court of St. James’s.

Introduced by The Baroness Hooper CMG, whose description of His Excellency as “not a career diplomat, but a natural one” was perfectly pitched, His Excellency’s carefully considered after-dinner speech charting Chile’s history post-Pinochet mixed economics and political philosophy with a profound appreciation of the country’s current sociology, providing a unique insight into an extraordinary nation.

Following the stepping-down of General Augusto Pinochet in 1990, ending 17 years of dictatorship, Chile has enjoyed a 30 year democratic tradition, with little tangible difference between 24 years of centre-left and 6 years of centre-right leadership, and economic growth per annum resting solidly between 5% to 7%, following broadly “neo-liberal” policies from both sides.

Yet, on the 18th of October 2019, Chilean democracy faced its greatest threat since the Pinochet era, with an air of revolution leading to the eruption of social discontent in the capital city of Santiago. 16 buses were burnt, attacks were reported at nearly all of Santiago’s 164 Metro stations, and power generators were set on fire.

To understand the reason behind this drastic deterioration in Chilean national stability and security, His Excellency sensitively looked to the past. In 1990, Chilean GDP per capita stood at around $2,300 dollars. 90% of the population lived in poverty. By 2010, this had risen to a high of almost $16,000 dollars. To quote Harold Macmillan, most Chileans had “never had it so good.”

Since the 1990s, life for Chileans had seemingly improved in every regard. Santiago gained the nickname of ‘Sanhatten’, developing into an exceedingly modern city with the Gran Torre Santiago, South America’s tallest building, a constant reminder of Chile’s newfound prosperity. An emerging class of rich Chileans, deriving their wealth from companies large for the country, moved to the city’s outer hills. Nominally, secondary education coverage was comprehensive, and by 2010 50% of the population boasted a university degree. A state bank, state development bank, and vast reserves of copper seemingly provided the financial and natural resources for Chile to continue on its upward trajectory.

However, His Excellency situated this sharp rise in national prosperity within the Tocqueville paradox, whereby an increase in equality leads to greater numbers of people wanting it, with an improvement in social conditions and opportunities leading to fast-growing societal frustration emerging as a disruptive, destabilising force. His Excellency developed this argument, citing the contradiction of capitalism, identified by Marx, namely that that good intentions often lead to bad results.

As life-expectancy rose from 72 to 83 years old, Chile’s poster-child pension system soon found itself unable to cope. The number of pensioners in care increased and an imperfect labour market forced many of their grandchildren onto the street. Likewise, whilst those living in Santiago’s hills enjoyed the fruits of their newfound wealth, those within its inner bowl remained trapped in poverty.

Secondary education coverage might have been nominally comprehensive, yet in reality many children did not attend school or work, falling prey to the tripartite, mutually-reinforcing evils of drug and alcohol addiction, football hooliganism, and organised crime. An associated decline in the Chilean Catholic Church augmented this societal rootlessness.

Furthermore, as university degrees became more common, their value decreased. Students in debt from degrees with diminishing income potential now found themselves ever-more receptive to anarchist ideas, which they had encountered at universities in Italy, Spain, and the United States. “An oasis”, to use President Piñera’s description of Chile in early October 2019, had become a powder keg, with an orchestrated campaign of fare dodging on the Santiago Metro by secondary-school students lighting the fuse that led to the deaths of 19 people, nearly 2,500 being injured, and 2,840 arrests.

Following a plebiscite in 2021 on whether to replace the Pinochet-era constitution and its “sin of origin” of being founded in dictatorship, which Chileans voted 80% in favour for, a constituent assembly was elected in May 2021. However, with turnout only 60%, a substantial number of radical individuals populate this 155-strong assembly, with at least 54 extolling the epistemology of decolonialisation, leading to concerns over its recommendations.

Nevertheless, His Excellency’s lasting message was one of hope. Mr Gabriel Boric, from the left-wing Approve Dignity coalition won Chile’s presidential election in December 2021, and will be sworn in as president on the 11th of March 2022. Despite being Chile’s youngest ever President, at 36 years old, and with his 4 primary ministers even younger, Mr Boric has already made some seemingly shrewd appointments, such as his 60 year old Finance Minister, a former president of the Chilean Central Bank.

In addition, Mr Boric will be supported by an outstanding vaccination program, one of the top three in the world, with 90% of the population already fully immunised, and strong reserves of copper, lithium, and green hydrogen, to enable his government’s commitment to decarbonisation, building on the previous Piñera administration being one of the first governments globally to increase its Paris Agreement pledges.

His Excellency’s speech was followed by an intriguing series of questions from our esteemed guests on subjects ranging from the Chilean research contribution in the Antarctic to the need for industrial policy and Chile’s approach to an 18% increase in the influx of refugees from Peru, Bolivia, Haiti, and Venezuela.

The evening was rounded off by CFCC Chairman The Rt. Hon. The Lord Taylor of Holbeach CBE PC FRSA, who noted most aptly how fortunate attendees were to be amongst friends in the magnificent surroundings of the House of Lords, with the trappings of excellent food, fine wine, and Black Tie only adding to the occasion. Indeed, Lord Taylor’s parting remark on the importance of the Lords as, paradoxically, an unelected body that nevertheless performs the utmost scrutiny for the benefit of democracy flawlessly rounded off a truly splendid evening.

We would like to thank His Excellency Mr David Gallagher for his engaging address, our guests for their kind attendance, and all at the House of Lords for their most generous hospitality. We look forward to seeing as many of our distinguished members, both new and old, at our next event, coincidentally also in the House of Lords, with The Baroness Goldie DL, Minister of State for Defence, on what promises to be another extraordinary occasion.

His Excellency, Mr. David Gallagher, was appointed Chilean Ambassador to the Court of St James as from August 2, 2018.

Oxford University Lecturer in the Literature of Latin America, member of the Latin American Centre, Oxford, and Fellow of St. Antony’s College, Oxford, 1968-74.With Morgan Grenfell 1974-84. Head of Representative Office in Caracas 1978-80, and in Santiago 1980-84.

He founded ASSET-Chile in 1984. ASSET-Chile is a Chilean based investment banking boutique, specialized in mergers and acquisitions, financings, restructurings and corporate strategy, advising major corporations in Chile and overseas. He sold his stake in the company at the end of 2017.

He writes for Estudios Públicos and other Chilean academic journals, and in English for the Times Literary Supplement (TLS) and the New York Review of Books (NYRB).