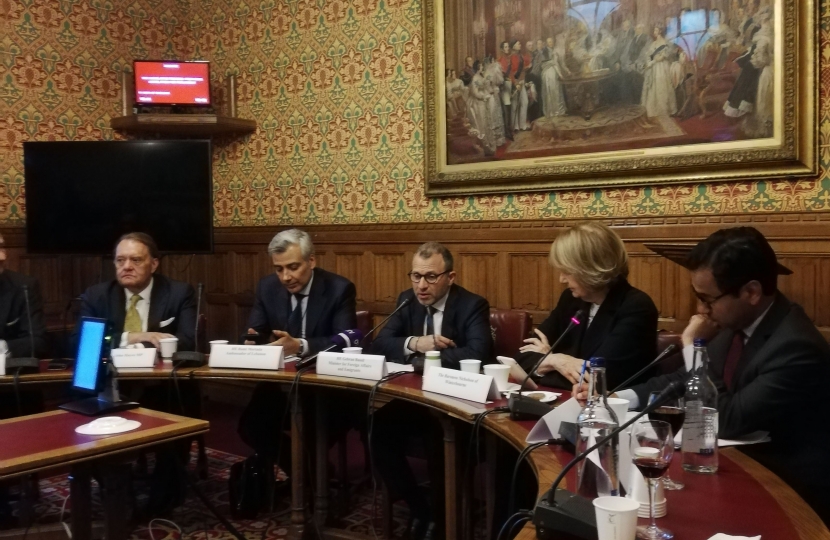 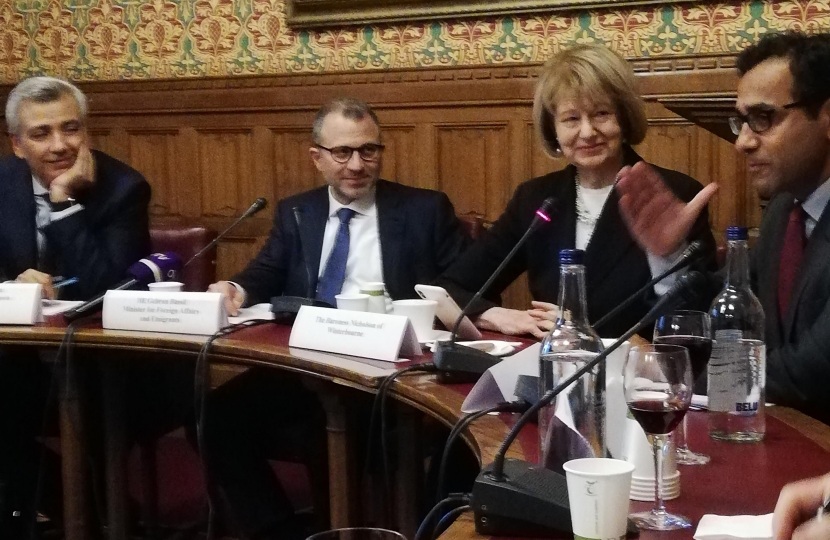 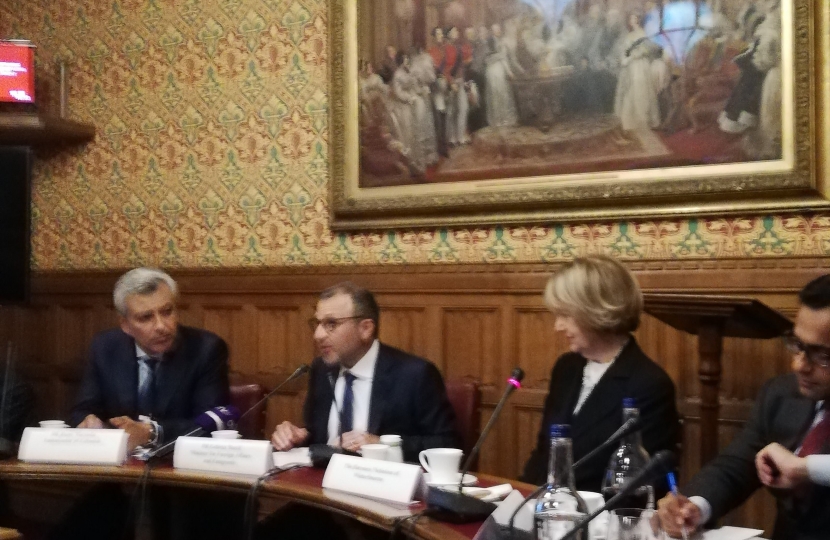 HE Gebran Bassil, Lebanon's Foreign Minister for Foreign Affairs and Emigrants spoke at the CFCC event in the Lords tonight.  The Ambassador of Lebanon, HE Rami Mortada was present as well as the Lebanon All Party Parliamentary Group Chairman, Rt Hon Sir John Hayes MP.

We are very fortunate and honoured to have both the Lebanese Foreign Minister and The Lebanese Ambassador as Guests of the CFCC this evening. Unfortunately the Minister's time here in the UK is very short and he cannot join in our Brexit arguments. On my left my close friend Rehman Chishti. I will invite the Minister to speak and I will summarise. Lebanon is a country with which we have many shared values, interests and a long-standing friendship has endured between it's people and the people of the United Kingdom.

Baroness Nicholson, thank you for your Invitation and for putting together this important meeting.

It is not an easy job to be Lebanese Foreign Minister.

Our National Agenda is stability, security and economic development.

The 2016 election brought President Michel Aoun into Office. After the recent Parliamentary elections last May (2018), Prime Minister Saad Hariri announced the formation of a national unity government. We have achieved security, democratic stability and defeated DAESH on our Eastern border. Indeed Lebanon was the first country in the region to defeat DAESH/ISIS.

Lebanon is a country of moderation. Extremists are marginalised. Indeed we believe that it is the isolation of extremism and extremists which is the key to regional stability.

We are committed to U.N. Security Resolution 1701*

Our country only resorts to the use of military force as a last resort. We will never waiver on our rights to the sovereignty of our borders.

The Refugee Crisis:We have approximately 200 displaced Syrians per kilometre on our territory.

We are told that there is no other solution except to wait until there is stability in Syria.

It is our belief that we must proactively engage with our stakeholders in the West to allow and facilitate Syrian refugees to return to their homeland.

We are in crisis management mode. The Lebanese economy however is and always has been, highly resilient. Despite our many challenges, the assets of the Lebanese State are very much intact. There is approximately 200bn dollars in the National Bank of Lebanon*

The national budget agreed a 7.6 reduction in debt. Lebanon is ready and open for business and investment. There is however a structural deficit in the peace and security infrastructure which must be addressed. Lebanon has a proactive and an independent foreign policy. We are non-aligned in any and all regional conflicts preferring the path of peace, security, prosperity and economic development as opposed to conflict and aggression. I am not just referring to the Palestinian-Arab-Israel conflict but to all regional conflicts.

Lebanon sees itself as a partner as part of regional solutions and not part of conflicts.

We want to be seated around the table as a part of the solution and not part of the problem.

We do not want to antagonise Iran.

We want a secular, unified and tolerant Syria but, even more important, that the Syrian people are allowed decide their own future.

In short, nobody should take us for granted.

Lebanon will always strive to be a good neighbour, a good citizen of the world.

No challenge is too small nor too great for us to strive to achieve and to accomplish.

Lebanon is by tradition, a trading nation. We are traders and sailors by heritage. Our objective is to continue to reconnect Lebanon to the rest of the world.

Speaking To Members Of The Conservative Foreign and Commonwealth Council At The House Of Lords, Committee Room G, On Wednesday 12th June, 2019)

The Ambassador of Georgia, HE Tamar Beruchashvili

CFCC members were welcomed at the new Embassy in Pimlico and were given a fascinating presentation on the foreign affairs of Georgia.